Similar to PFDs, CFR 135.167 (Emergency equipment) also includes the requirements for liferafts for extended overwater operations, along with the extra sets of required equipment contained within the liferafts.  This includes any aviation operation, as discussed previously, greater than 50 miles from shore, just like PFDs. In CFR 91.509 (Survival equipment for overwater operations) the rules requiring liferafts extends the regime to 100 nautical miles from shore or alternatively, a total of 30 minutes flight time from shore. In Part 135 Operations, at least one liferaft needs to include an operable Emergency Locator Transmitter.

Liferaft specific requirements for carriage overwater are also covered under the Air-worthiness for transport aircraft section CFR 25.1415 - (Ditching Equipment) of the regulations.  The regulations for the extended overwater regime require two separate Type I liferafts onboard. Type I means designed for use in passenger transport aircraft. Alternatively, Type II liferafts are designed for non-transport (cargo) aircraft. In both cases, such that after losing the largest liferaft there is enough space in the remaining liferaft(s) for all possible seats aboard the aircraft (not just the passengers on the flight).

For instance, if an aircraft has a 15-person seating capacity and 3 crew seats, then two 12-person liferafts would be acceptable. If one is destroyed or inaccessible, the deployed 12-person liferaft will accommodate 18 people (12 + 6 overload). Generally, the largest corporate aircraft liferaft carried will be a 14/21, which will accommodate 18 passengers and 3 crew. Unless excess liferafts of enough capacity are provided, the buoyancy and seating capacity beyond the rated capacity of the liferafts must accommodate all occupants of the airplane in the event of a loss of one liferaft of the largest rated capacity. 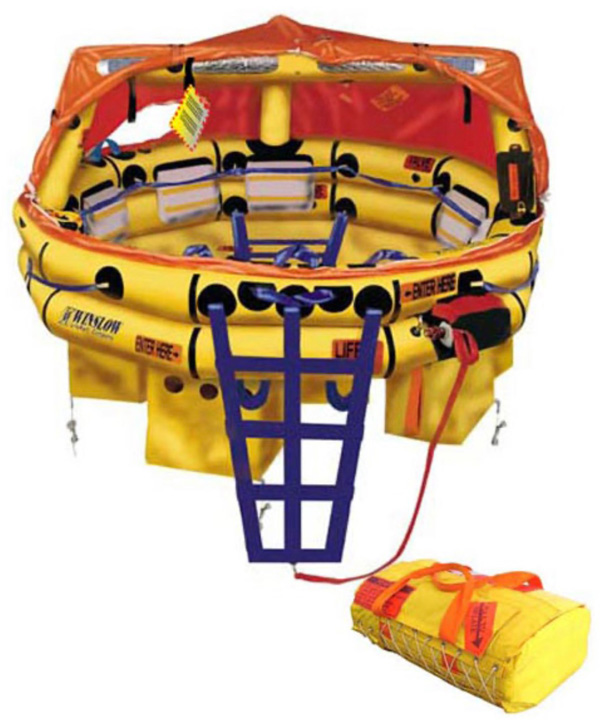 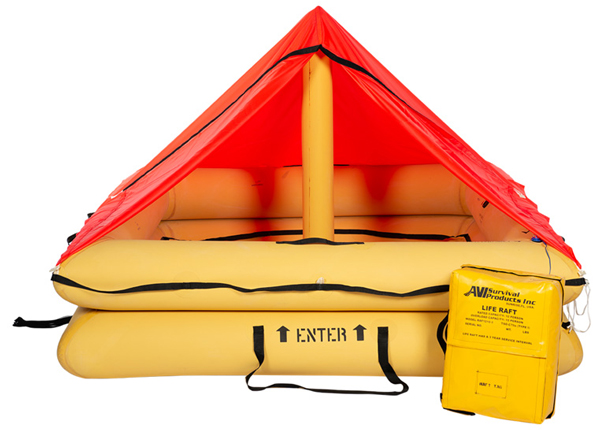 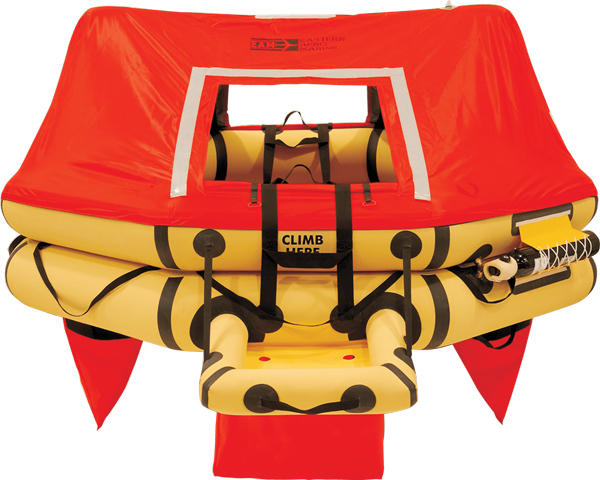 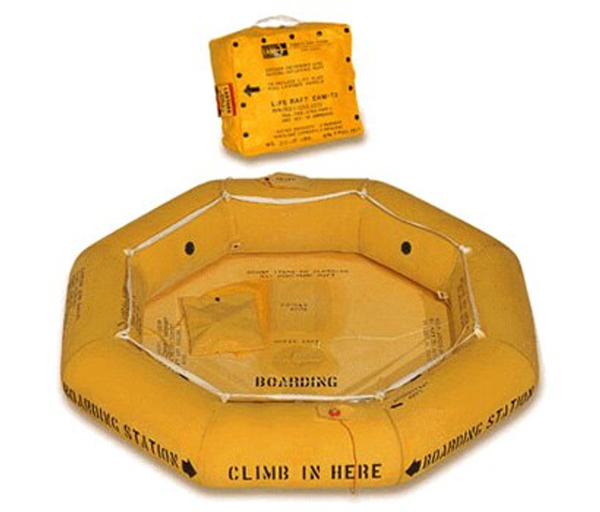 Location, Function and Operation of Additional Items of Emergency Equipment 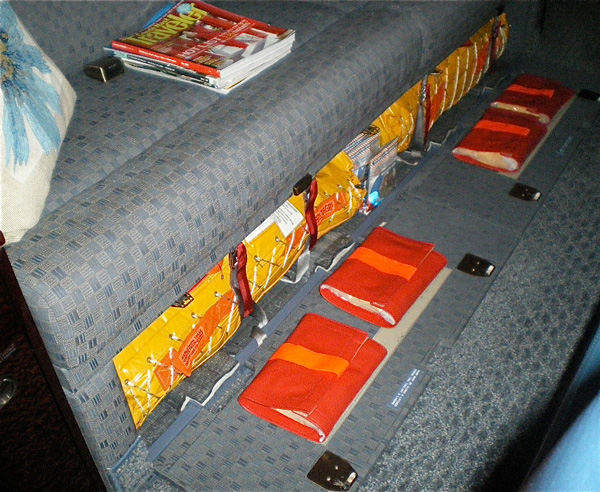 Photo courtesy of Tim Kneeland
All crew members must know where all the emergency equipment resides on the aircraft and how to access any of it, if needed.  The image shown provides a common example of such emergency equipment under an aircraft divan.  The two required liferafts lie strapped into the base, the smoke hoods are nestled between the liferafts, and the life preservers are strapped to the upholstered front cover of the divan.  We will discuss how to use cabin smoke and fumes equipment at length, suffice for now that crew members and even passengers know that they exist, how to use them, plus as already mentioned, how to access them quickly if needed.

Every certified liferaft will carry labels and inspection records which identify serial numbers, rated capacities of the equipment, weight, inspection schedules and expiration dates for those certification inspections. Also note that the yellow valise pack indicates that a 406 MHZ ELT is installed. Although sometimes marked differently, the example tag shown below comes from a Type I, 14-person Winslow liferaft, which is common on larger corporate aircraft. Also note the due date for the next inspection in the yellow circle labeled “next service due date.” The folded FAA 8130-3 Authorized Release Certificate, Airworthiness Approval Tag from the pocket shows the detailed inspection and verification for all of the equipment contained within the packed survival kit or, in some cases, the kit attached to the liferaft. 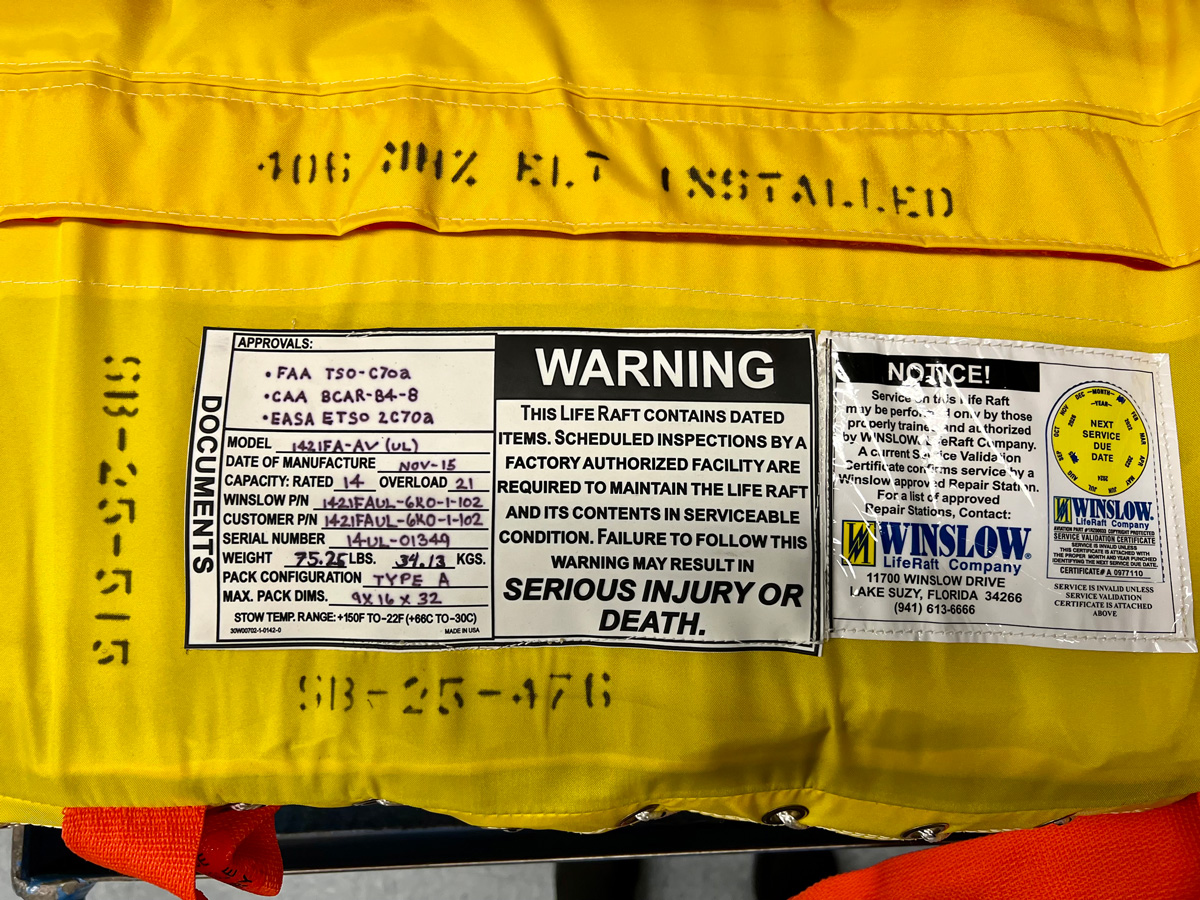 Photo courtesy of Tim Kneeland
All crew members should physically look at the liferafts on every corporate aircraft they fly. When your crew has some downtime, we recommend placing the liferaft (never inflating, of course) on a divan and reviewing the labeling, contents, and options for attaching the mooring line buckle to a hard point (see Unit7d) inside the aircraft. 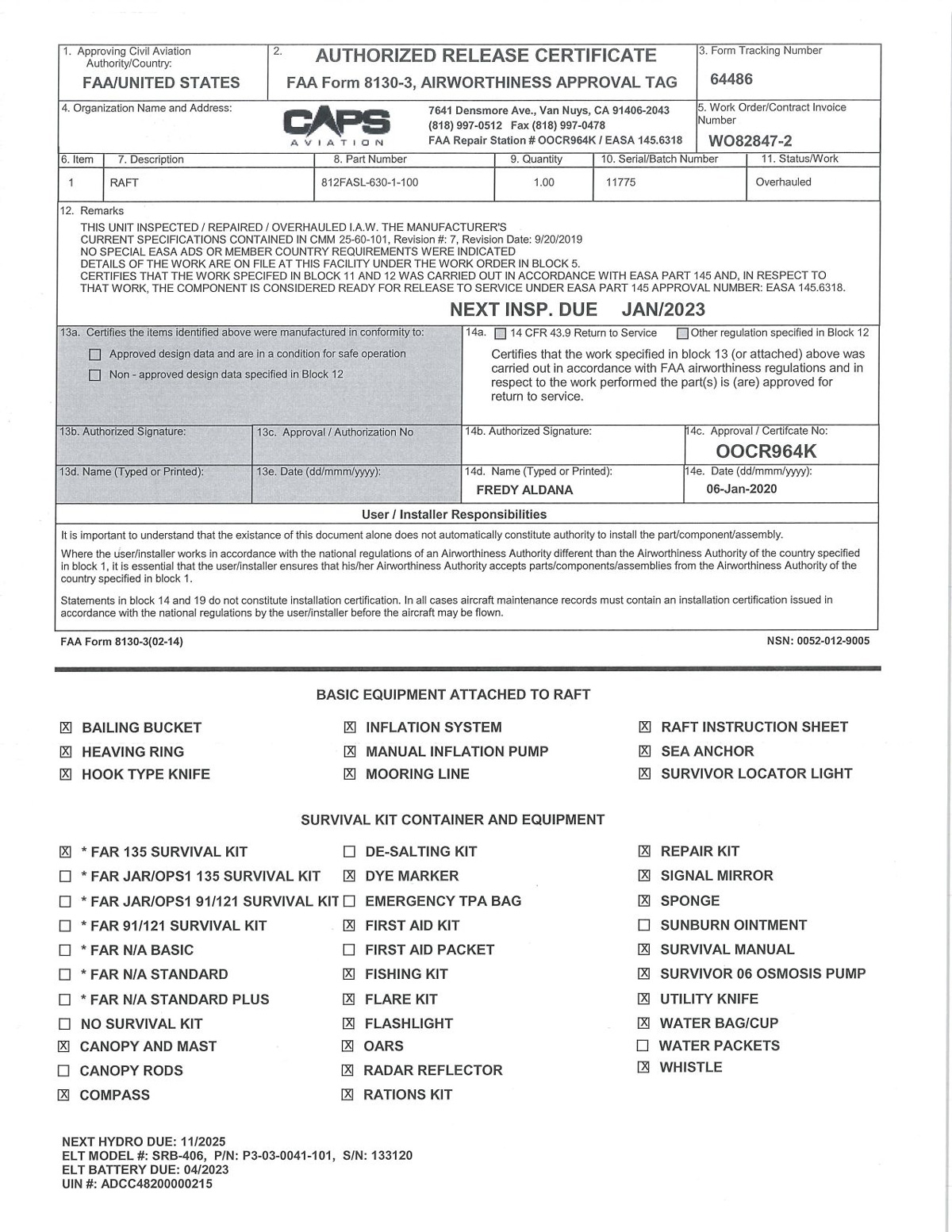 Winslow, EAM Worldwide (Eastern Aero Marine), and Survival Products are among the most common manufacturers of corporate liferafts. All corporate transport category liferafts come prepacked with a variety of equipment and survival supplies. These will be discussed in more detail in the Module 6: Ditching and Evacuation Procedures.

Securing a Liferaft to a Hardpoint Inside the Aircraft 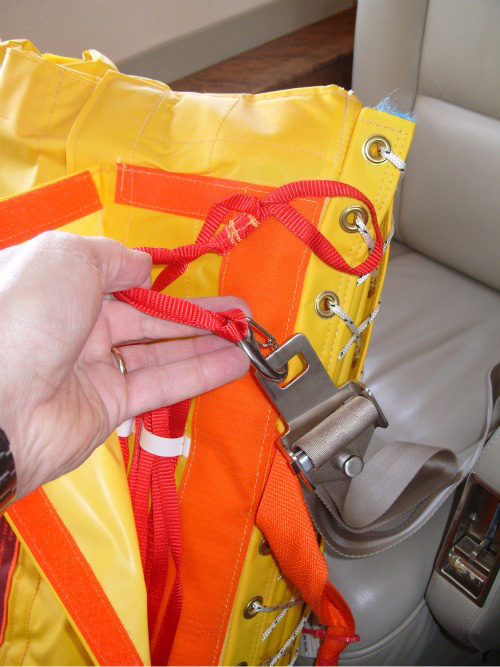 On the outside of most aviation liferafts, you will find a lanyard, also called a mooring line, static-line, or painter.  In an emergency, these lines secure the liferaft to the inside of the aircraft. Once a liferaft is inflated outside the aircraft, it prevents it from floating away, while also providing an anchor to pull against for the auto-inflation process.

In this image, courtesy of Bizjetsep, the manufacturer placed a metal clip at the end of the line to facilitate attaching it to a hard point within the aircraft cabin.  This hard point fastener allows for the automatic inflation of the liferaft when the lanyard plays out, usually at 35 feet.  Part of the technical specification for most corporate aviation certified liferafts requires that such a lanyard breaks or comes free at or below 500 lbs. of pull force.  This prevents a deployed liferaft from sinking with the aircraft if the crew forgets or is unable to disconnect the lanyard after boarding.

Always take special care to inspect how liferafts are secured in the cabin as part of the preflight inspection.  Sometimes, to securely stow a liferaft, well intentioned maintenance personnel might create a situation leading to unfamiliar crewmembers having difficulty freeing the liferaft for use in an emergency. 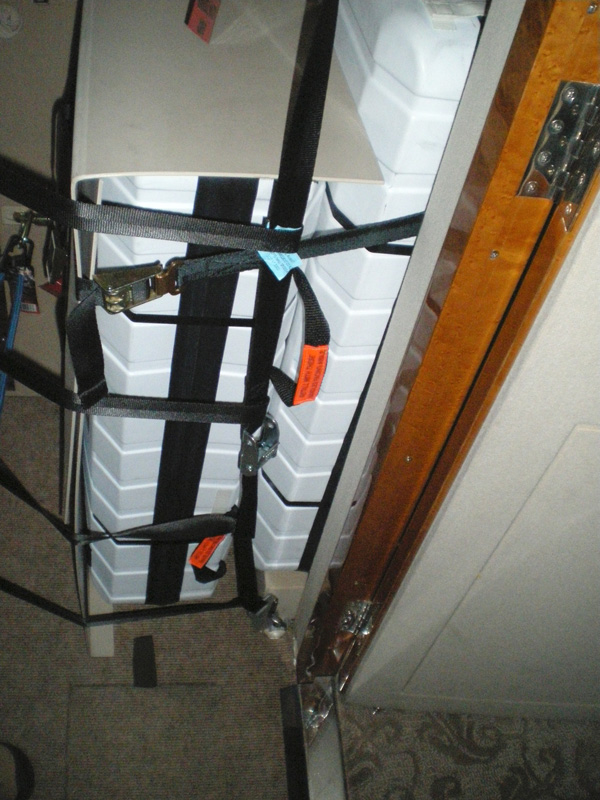 Photo courtesy of Tim Kneeland
Try to imagine untangling or untying a web of straps and netting to get to the liferaft and other survival equipment.  Consider a potential lack of visibility due to smoke, darkness, partial submersion in water, etc.; not to mention a potentially injured crewmember needing to retrieve a heavy liferaft quickly as the situation evolves.  Untying a web of nylon strapping to access emergency equipment, especially a liferaft, may create an unnecessary and avoidable costly hazard. After a water landing, survival depends on successfully deploying one or more liferafts. Make sure you can quickly release it from its the strapping. If you see complicated strapping, get it corrected with intuitively obvious or quick release straps instead.
You need to be logged in to see your course progress.